Hangzhou South Railway Station has been closed for reconstruction and it will be re-opened by the end of 2016. Located in No.1, Tiancheng Road, Jianggan District, Hangzhou East Railway Station started business operation in July 1st, 2013. 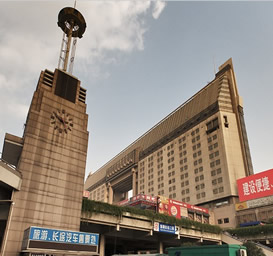 The Station Plaza consists of two floors below ground level: Lower Ground One and Lower Ground Two. The underground area measures 16,500 square meters in which there are two underground garages for civil defense projects. The two garages which are affiliated with Shanghai Railway Bureau (the station’s supervising office) occupy an area of about 6,200 square meters. It is a first-class station that consists of a North Ticket Hall and a South Ticket Hall, five regular waiting rooms, one waiting room for passengers with soft-seat tickets, and seven platforms.

Tickets can be purchased 10 days (including the purchasing day) in advance in railway stations. Besides, tickets are also available at ticket offices around the city. At present, there are about 75 ticket offices in Hangzhou. When buying tickets at ticket offices, you have to pay an extra 5 Yuan for each ticket. There are many ticket office on the second floor as well. For foreigner, passport required when buying the train ticket. 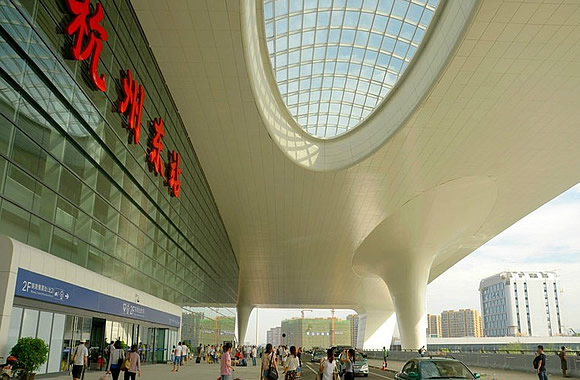 Hangzhou East Railway Station, or Hangzhoudong Railway Station is located on Tiancheng Road on Jianggan District. It was closed on 20 January 2010 for improvement and opened to use on July 1st, 2013. It covers a total area of 0.34 square kilometers. It’s a comprehensive railway station that combines various transportations such as high-speed rails, ordinary trains, expresses, maglev trains and water transport, all of which make it one of the biggest transportation hubs in the world. The station consists of five floors, with three floors underground and two aboveground. It has taken over the passenger transportation of the South Railway Station since Jul. 2013. Being the intersection of HuKun (Shanghai - Kunming) Line and Shanghang (Shangqiu - Hangzhou) Line, the station operates high speed and bullet trains mainly as well as a few other types. Currently passengers from the station can reach to Beijing, Zhengzhou, Shenzhen, Xiamen, Chengdu, Wuhan, Shanghai, and Qingdao.

Hangzhou East Railway Station adopts the model of departures on the bottom floor and arrivals on the upper floor. Passenger can transfer among train, metro, city bus and taxi easily inside the train station. Having come out from the train station, passengers can find the wharf where they can board water buses to pay visit to the charming scenery along the Grand Canal.

As you can see from their names, on the platform floor on ground 1 you can see many railway tracks, it is the place where trains stop on; to board the train, passengers should firstly go upstairs to wait the train on the elevated waiting floor; having getting off from the train, passengers should go downstairs from the platform floor to the arrival floor on basement 1 to transfer to bus, taxi and etc to leave the station.

On the elevated waiting floor, there are three ticket offices located in the southwest corner, the northeast corner and the northwest corner respectively. Meanwhile, there are totally six entrance gates inside it including two in south-north direction and four in east-west direction. After having gone through security inspection procedure, passengers can enter the train station through any of these entrance gates. A total number of 28 check-in gates are located in the south part and the north part of the elevated waiting floor with LED television showing the train number to check in overhead. From the waiting floor, passengers can use either staircase or escalator to go downstairs to the platform floor to board the train.

Tickets can be purchased 10 days (including the purchasing day) in advance in railway stations. Besides, tickets are also available at ticket offices around the city. At present, there are about 75 ticket offices in Hangzhou. When buying tickets at ticket offices, you have to pay an extra 5 Yuan for each ticket. Several ticket offices are being in operation in the station. Two of them are located in B1, one in the southwest and another in the northeast direction. Besides, there are three places where one can buy tickets on the second floor, respectively in the northeast, northwest and southwest direction. There are 79 self service ticket machines and 28 ticket windows in the station.

By metro: Line 1 provides a direct link from Hangzhou East to the main Hangzhou station. It takes about 25 minutes and costs 3 yuan.

By bus: Take bus 105 to Jianguo North Railway Station and then transfer to bus 90. The cost is between 2 and 4 yuan. It is about a 45-minute ride from Hangzhou East.

Next: What to buy in Hangzhou